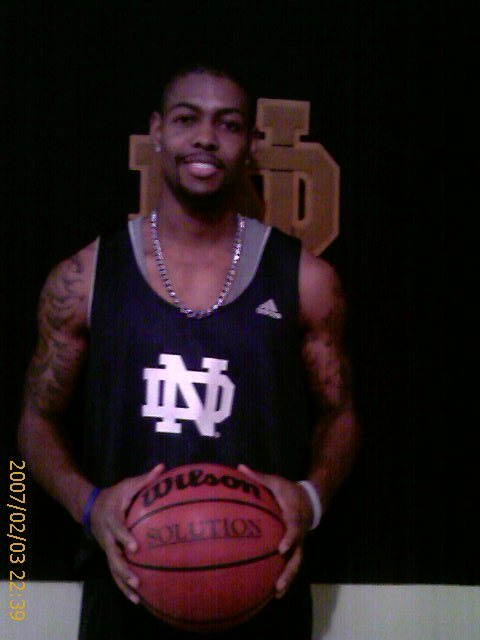 Echoes From the Golden Dome

Echoes from the Golden Dome

Now that you’ve let me ramble on a bit, here’s a sneak peek at a portion of one of the chapters I am working on. This is from Chapter 5, which is about former Notre Dame basketball player, Charles Thomas Jr.

“My journey to Notre Dame was actually pretty interesting. I knew nothing about Notre Dame until my senior year of high school. I grew up in Flint, Michigan, surrounded by a bunch of young black men, and many of us didn’t know anything about Ivy League schools, or schools such as Notre Dame … at least I didn’t. I only really knew about the schools I could ‘see,’ such as Michigan, Michigan State, Central Michigan; and I certainly never thought, ‘I want to be a Golden Domer.’”

“I went to this summer basketball camp and met some coaches from several different schools, one of which was Notre Dame; and so I put ND on my list. I literally thought Notre Dame was located in California. My counselor called me into his office one day and said,

‘Have you ever thought about applying to Notre Dame and Princeton?’

‘I don’t know where Princeton is, and I don’t want to go to California.’

‘Notre Dame is in South Bend!’

“During my senior year of high school I got the itch; and I just had to go to Notre Dame. When Mr. Reynolds planted the bug in my ear, my entire focus shifted to getting into Notre Dame. And then, once I got accepted, the only thing on my mind was playing basketball at Notre Dame. I knew academically I would be okay, but athletically I was so small. There was no reason I should have thought I had any chance to play basketball at that Division I school, with players of that caliber.”

“When I arrived at Notre Dame, I went to the basketball office (Coach McCloud was the head coach at the time), and I introduced myself. ‘Hey, I’m Charles Thomas, and I’m from Flint, Michigan. I want to speak with someone regarding the process one must go through to play basketball here.’ One of the coaches came out to meet me, and the coach looked at me and he asked, ‘Charles Thomas, how do I know that name?’ And I answered, ‘I’m from Flint, Michigan.’ And he emphatically replied, ‘You’re not 6’1” tall!’ My coach, Ray Jones, had made me out to be much bigger than I actually was!”

“My AAU Coach, Ray Jones, had written letters about me, and filmed me working out in the gym, and had bombarded the Notre Dame Basketball office with information about me. He told me if I ‘work, work, work, work, work,’ we’ll figure out a way to get you to Notre Dame.”

“One of the coaches at Notre Dame’s basketball’s office told me the process that I needed to follow in order to try out for the basketball team. He told me I couldn’t ‘officially’ practice with the team, but informed me that I could work out at the Rock (workout facility and basketball gym for students on campus) in order to get ready for tryouts. He also told me that I could play pick-up games with the guys on the team, if they decided to pick me. “You just have to keep showing up,” he said. “With the stringent NCAA rules, as a prospective walk-on, you aren’t allowed to practice with the team before tryouts, and so I would go sit in the gym and watch them practice. I would keep going, day after day. I wanted them to see my commitment, and know how much I wanted to play with the team.”

“One day as I sat and watched them practice, one of the guards twisted his ankle, and so they called over to me, ‘Hey Chuck, you want to play? What kind of question was that? Of course I wanted to play.?’ And from that day on, every day they picked me to play with the team.”

“At this point, I’m practicing with the team every day. When fall break rolls around, Coach Billy Taylor tells me, ‘go home for break and we’ll call you and let you know when tryouts are.’”

“When the call came during fall break, that epic phone call, that moment of joy on the phone; at first, I thought the call was a joke. Coach Taylor called and said, ‘there’s no need for you to try out, the fellas love you, come on back.’

“We drove back to campus the next day, and when I walked into the gym, the lights felt like they were so much brighter. The team was standing there in the middle of the court, clapping for me.”

“Academically, classes at Notre Dame were so hard. I knew it was going to be hard, but I wasn’t doing as well as I thought I was going to do. The conversations were just so different from what I was used to. We never talked about economics or any of these topics at home. But my parents had instilled this tremendous work ethic in me, and that even though I didn’t have all of the resources that many of my peers had, if I worked hard I could make it happen.”

“I called home and told my parents that I did not belong at Notre Dame, and my mother quickly told me that I needed to stop my ‘woe is me’ act. My mom sold her car so that I could stay in school. I may not have believed in myself, but she absolutely did.”

“My teammates, however, were so cool. They told me told me to keep coming to practice. The focus that I had from my senior year of high school, straight through to October of my freshman year at ND, it was a singular focus to play basketball at Notre Dame. Months and months of the same routine every day, run, workout, shoot, eat, study, sleep, repeat; had finally paid off with that moment in the gym when my teammates were applauding me as I walked in. Easily the most memorable moment I had during my time at Notre Dame.”